Just finished attending the Literacy Research Association conference, and while I'm totally disappointed to be stranded in Dallas due to an ice storm, I was nicely impressed with the conference. I learned a ton and saw some good friends.

Of particular note was the final plenary with Carol Lee, David Bloome, Kris Gutierrez, and Rob Tierney. They were so interesting. Carol's title "It is rocket science" referring to literacy research was awesome and framed her talk nicely. David talked about the possible overuse of the term "literacy" especially as it has become linked with conceptions of competence. Kris discussed her amazing work on horizontal and vertical learning and social design experiments. And Rob inspired us to not give up.

Here's a Foucault quote I love that I used to close my discussant comments on a session:
"Brothels and colonies are two extreme types of heterotopia, and if we think, after all, that the boat is a floating piece of space, a place without a place, that exists by itself, that is closed in on itself and at the same time is given over to the infinity of the sea and that, from port to port, from tack to tack, from brothel to brothel, it goes as far as the colonies in search of the most precious treasures they conceal in their gardens, you will understand why the boat has not only been for our civilization, from the sixteen century until the present, the great instrument of economic development...but has been simultaneously the greatest reserve of the imagination. The ship is the heterotopia par excellence. In civilizations without boats, dreams dry up, espionage takes the place of adventure, and the police take the place of pirates." From Of Other Spaces
on December 08, 2013 No comments:
Email ThisBlogThis!Share to TwitterShare to FacebookShare to Pinterest

Felt disappointed in the recent NCTE conference. I've been disappointed in this conference for a while. I went to some good sessions, but no matter which session, I wished they would push further. A session on critical literacy in early childhood, for example, ended up talking about fairness. While fairness is a starting point for working young children, it doesn't go far enough and it underestimates young children's critical literacy abilities. Vivian Vasquez's work has shown us this for years.

That was another disappointing piece - I heard things we've been talking about for years. We all know that meaningful, authentic literacy practices should be taught in schools and that when we do teach this way, children and youth thrive. How long will we just talk about the way things should be instead to taking action to make it so?

Lastly, I was really disappointed in sessions that presented work by youth where the presenters were amazed at how smart youth can be. Really?! Are we still amazed at this point? Or is it amazement at the fact that urban youth are creative producers of literacy. We've known for a long time that when youth are given authentic spaces to be who they are, who they are is smart, articulate, future building literacy users.  Amazement doesn't seem appropriate.

Hopefully, LRA will be better next week.
on November 27, 2013 No comments:
Email ThisBlogThis!Share to TwitterShare to FacebookShare to Pinterest

My new book, Radical Equality in Education: Starting Over in U.S.Schooling is now available for pre-order on Amazon. I'm so excited! 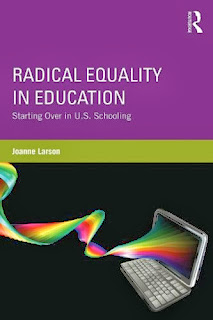 on November 08, 2013 No comments:
Email ThisBlogThis!Share to TwitterShare to FacebookShare to Pinterest

After the Zimmerman verdict

It's two days after the Zimmerman verdict and I'm still reeling. I'm disgusted. And not just at the verdict. I'm disgusted at the reactions where people say they weren't surprised. I get the sentiment, but that we are not surprised is as bad as the verdict. Shouldn't we be surprised that it's okay to kill young black men in this country?! Shouldn't we be surprised that people so easily accepted this verdict as inevitable?!

Maybe surprised isn't the right word. Outrage. Disgust. Sadness...maybe. That we are so blind to the endemic racism in this country surprises me still. That being black means unequal treatment under the law surprises me. It outrages, disgusts, and saddens me.

But, as my friend George Moses asks, what are you going to do about it? Good question. As a mother of a biracial male child (read black in this country), I am challenged to know what to do. My son knows he's black but I don't think he knows what that means. George says I can't teach him, that he has to learn it on his own. But now that it's okay to shoot young black men, I'm not sure I can just let him figure it out.
on July 15, 2013 3 comments:
Email ThisBlogThis!Share to TwitterShare to FacebookShare to Pinterest

I am sitting in the Genesee Valley Writing Project's invitational advanced summer institute totally loving the chance to work and write with awesome teachers. We've started a blog if you're interested. One of the early posts talks poignantly about current measurements for teachers and about how they don't cover what actually happens between a teacher and her/his students. It's worth a read.

on July 09, 2013 No comments:
Email ThisBlogThis!Share to TwitterShare to FacebookShare to Pinterest

I'm listening in on students in my summer literacy class as they use all the principles we have discussed thus far to design their own classrooms. It's totally cool to hear their voices get excited as they imagine what's possible. I tell them that they have all the money they need and no standardized tests to worry about. The interesting thing though is that everything they are designing can be done within the current environment. Some would need some creative fundraising, but all can be done. I love listening to them create.
on June 11, 2013 No comments:
Email ThisBlogThis!Share to TwitterShare to FacebookShare to Pinterest

Defining literacy as a class

Here is my summer 2013 literacy class's definition of literacy:
Literacy is:

What do you think? What, if anything would you change?
on June 04, 2013 1 comment:
Email ThisBlogThis!Share to TwitterShare to FacebookShare to Pinterest

Literacies at the Market project

I've been working on a participatory action research project at a local "corner store" transformation project and we've come up with the following local definition of literacies (rooted in a literacy as social practice perspective):

"literacy needs to be seen as a set of multiple and changing social practices that carry and shift across specific sites and persons within a complex web of relations. In other words, to be “literate” or educated means negotiating these interdependencies and the challenges and conflicts that each implies. Rather than seeing challenges and conflicts as deficits, we posit that they are the fuel that enervates dynamism and change."

What do you think?

on May 03, 2013 No comments:
Email ThisBlogThis!Share to TwitterShare to FacebookShare to Pinterest

Here's the gang after presenting at NCTEAR in Columbus Ohio. Our "reading the neighborhood" work went really well. 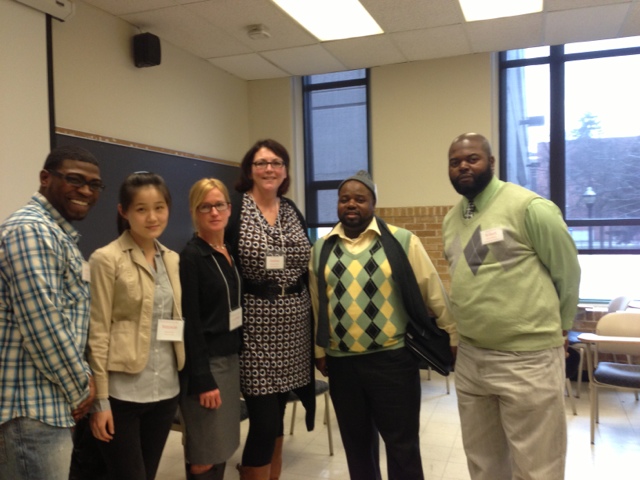 Joanne Larson
I am a language and literacy researcher with a mission for social justice and equity. 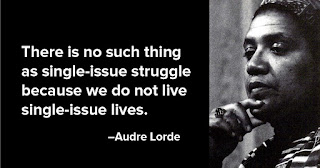